Growing up in Northern California amongst countless miles of rivers, streams, lakes, and ponds, I probably caught my first bluegill before I could even walk. Although it wouldn’t be until after my tenth birthday that I would feel that familiar bend on a fly rod, there are few things that remind me of my childhood more than chasing bluegill on a warm summer afternoon. These are the Bluegill Days.

Most fly fishermen have caught their fair share of bluegill, and they’re becoming more and more popular every year, but I still think they’re a fairly underappreciated species of gamefish, especially since one likely doesn’t have to travel far to find them. They abound in nearly every lake, city pond, canal, and river in the country, they make excellent table fare, they put up a fight, and most of the year they’re not too hard to fool into taking a hook.

Like what we are creating? Buy us a coffee to say thanks!

Most of the year bluegill, and many other sunfish for that matter, can be caught on nymphs from late spring through summer and into early fall. They can also provide some big excitement on small poppers and dry flies. For the sake of this article, I’m going to break it down into season, my favorite flies, and where I look for fish, followed by the gear I normally use.

Spring: Spring is the beginning of the season for big slab bluegill. Spring is when big fish start moving into shallow water and start feeding in preparation for spawning, and although they may be less active than later in the year, once you can get a fly near them, you’ll often get into some nice fish. Before and into the spawn, I like to fish natural looking nymphs, similar to those I’d fish for trout, and I fish them slow off of humps and along the outer edges of shoreline weeds. 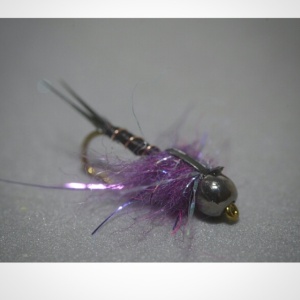 Summer: By the beginning of summer, the Bluegill spawn is in full swing and the big fish have moved in shallower than they’ll be most of the year, but the biggest fish will often be found spawning just a little deeper than the smaller fish you’ll likely see all along the shoreline. Just like spring, I like fishing nymphs, though, this time I’ll throw something to get a little more attention. One of my favorites is my Hogan’s Hero (a take on Hogan’s S&M Nymph) in black and purple. I’ll fish it in 4-6 feet of water, and it’ll often get picked up before it even reaches the bottom. Bead Head Woolly Buggers are usually a good bet as well. Once the spawn turns off however, the biggest of the ‘gills will often move back out into deeper water – this is when I wait until the late evening. 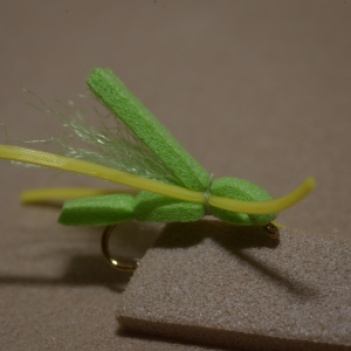 As exciting as the spawn bite can be, nothing compares to a summer evening top water bite. Foam poppers and spiders, Hopper flies, and even your typical trout dry flies can providing some exciting, explosive action. If I find big fish, I’ll fish my dries in the same places I’ve caught them on nymphs, or I’ll make blind casts to likely holding places such as logs, rocks, current breaks, potholes, or docks.

Fall: The leaves are changing, the water is starting to cool, and the big fish are shallow again. Early fall signals that its time for the fish to start loading up on protein to get ready for a slow, lethargic winter. This is my second favorite time to throw nymphs and baitfish imitations. I’ll fish the fall in the same spots I would have chased fish prior to the spawn in the spring, using the same nymphs. 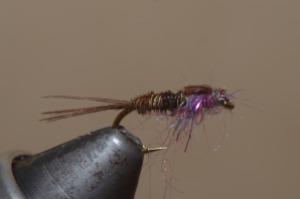 Winter: I’m usually spending my entire winter chasing anadromous quarry – but if you feel the urge to chase Bluegill in the coldest months, they can still be found around shallow cover, though you-ll want to fish slow and deliberate, sticking as close to any cover as possible. Just like bass fishing, winter is all about a reaction bite. On those days I don-t have anything else to do, I-ll fish a local pond with some Bead Head Hot Spot Pheasant Tail nymphs.

Gear: Any light to ultralight rod setup will work. I have two rods that I usually fish. The first rod I ever built is a 7’9″, 3 weight that I still fish to this day. The 2nd is a Redington Classic Trout 7’6″, 2 weight. Both of these rods are completed with old Click and Pawl Reels and Rio In-Touch Perception 3 weight line.

Although this article is technically about Bluegill (Lepomis macrochirus), these rules can be applied to all fish of the genus, including Green Sunfish, Pumpkinseed, Redear, Warmouth, and Longear Sunfish among others.

One thought on “Bluegill Days: How to Catch Sunfish Year Round”

0
0
Your Cart
Your cart is emptyReturn to Shop
Continue Shopping
Loading Comments...